Urban flood resilience in Rotterdam – the Benthemplein Water Plaza, the first large-scale multifunctional water plaza in the world. Visitors can sit and relax, play sports or skateboard in the sunken interior, which also doubles as flood storage, collecting runoff from the surrounding streets and discharging it back into the system when drier weather resumes.

The water square combines water storage with the improvement of the quality of urban public space. The water square can be understood as a twofold strategy. It makes money invested in water storage facilities visible and enjoyable plus generates opportunities to create environmental quality and identity to central spaces in neighborhoods.

Most of the time the water square will be dry and in use as a recreational space. The exemplary design for the watersquare is divided into two main parts: a sports area and a hilly playground. The space is captured by a green frame of grass and trees. When heavy rains occur, rainwater that is collected from the neighborhood will flow visibly and audibly into the water square. Short cloudbursts will only fill parts of the square. When the rain continues, more and more parts of the water square will gradually be filled with water. The rainwater is filtered before running into the square.

The rainwater will be held in the square until the water system in the city has enough capacity again. Then the water can run off to the nearest open water. The water square is therefore also a measure to improve the quality of the open water in urban environments. After it has been in use as buffering space, the water square is cleaned. Therefore the design is made with fluent slopes. 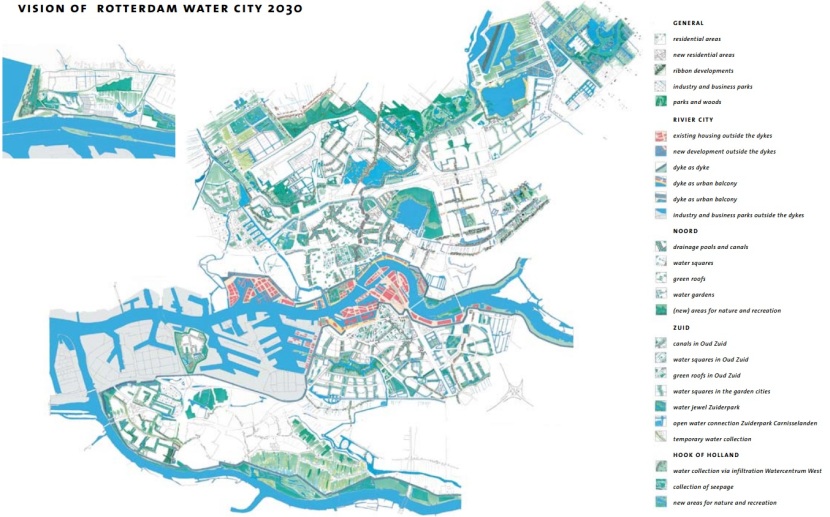 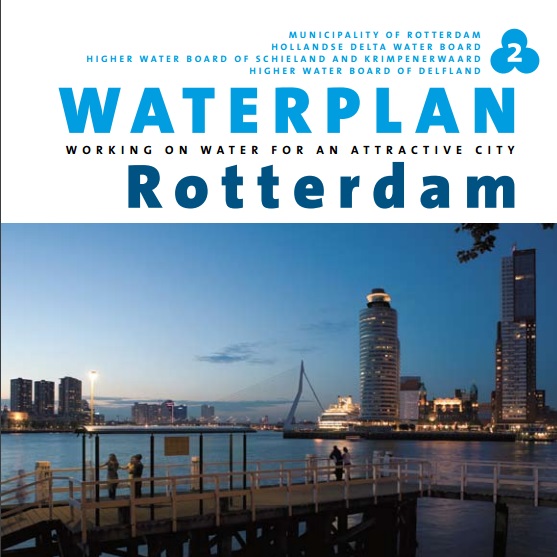 Rotterdam is working on a strong economy and an attractive residential environment. Water is an important aspect of an attractive city, certainly one that profiles itself as ‘water city’. The vision of Rotterdam for the future plays an important role in all the plans. In addition, there are three crucial developments with which we will, or might be, faced in the period ahead:

The masterplan document sets out ‘decisions of crucial importance’ to tackle the above problems citing the attractiveness of Rotterdam as perhaps the most important decision: how can the city be made even more attractive as a place to live, work, study and spend leisure time, and can the water problems be solved at the same time? In the city centre and the old neighbourhoods, for example, it isn’t possible to tackle the problems of water storage by digging extra facilities. The costs are exorbitant and existing buildings can’t simply be demolished. Innovations such as green roofs, ‘water squares’, alternative forms of water storage and the like are therefore essential for the further development of the city.

In 2010-12 Landscape Interface Studio (LIS), Kingston University supported the communication and dissemination of the ‘Waterways Forward’ project, funded by the European Union Interreg IVC programme. The project brought together 17 partners from 11 EU countries plus Norway and Serbia and was led by SRN (Dutch Recreational Waterways Foundation, Netherlands).  During the project partners were asked to identify examples of good practice in water management and LIS analysed the results using the best examples to illustrate as leaflets for download.  The following describes the Room for the River project which has been fundamental to the Netherlands management of rising water levels. Larger versions of these good practices can be downloaded from the Good Practice Posters & Leaflets page. 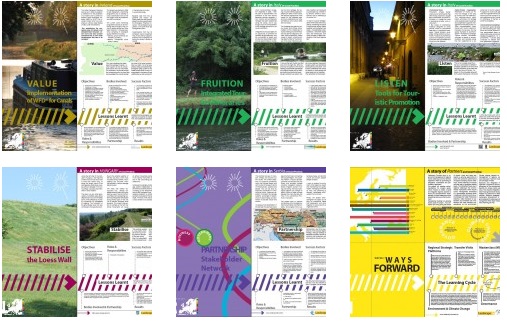 “The area available for the rivers has decreased continually during the past centuries. The rivers are confined between high dikes and more people live behind the dikes. At the same time the land behind the dikes has sunk due to soil subsidence. In addition, since it now rains harder and more frequently the rivers need to discharge more water to the sea. A flood in the current conditions would put the safety of 4 million people at risk..” Room for the River, SRN

The residents in the northern region of the Rhine River were confronted by anxious times in 1993 and 1995. The water levels were extremely high and the dikes just managed to hold. A quarter of a million people had to be evacuated.  Extremely high river discharges will occur more frequently in the future and for this reason it was decided in 2007 to ensure that the rivers would discharge the forecast greater volumes of water without flooding. The Government approved the Room for the River Plan (Planologische Kernbeslissing Ruimte voor de Rivier) .

A range of measures have been implemented to create more room for the river and reduce high water levels, such as lowering the floodplains, relocating dikes further inland, lowering groynes in the rivers and deepening the summer beds. Strengthening dikes is a measure that will be implemented only when the alternatives are too expensive or inadequate. The programme also aims to boost the economy, ecology & scenic value of the rivers region; investing in its environmental quality will make the region more attractive & appealing, and will offer more room to nature & recreation.

“The continued strengthening of the dikes is an option that would reduce the risk of flooding. However, any flood that occurred would result in even greater damage since more water would flood to the sunken land behind the dikes. A trend has to be broken if the Netherlands is to be a safe, comfortable and pleasant country for its inhabitants. The answer is given by the ‘Room for the River’ plan. The Dutch government is taking action to improve safety and to protect the land and people living behind the dikes from floods. The river will be given more room at the total of 39 locations covered by the ‘Room for the River’ Programme. The main objectives of this programme are to complete the flood protection measures by 2015 and to improve the overall environmental quality in the river region.” Source: Manon van Meer, Dutch Recreational Waterways Foundation (SRN)

The Room for the River project:

The following case study is used to illustrate the use of the Green Infrastructure Valuation Toolkit developed by Natural Economy Northwest, the Northern Way, Natural England, the Commission for Architecture and the Built Environment, Design for London and Tees Valley Unlimited, Genecon LLP with support from the Department for Environment, Food and Rural Affairs, the three Regional Development Agencies in the North of England, Advantage West Midlands and the London Development Agency.
The toolkit was developed to assess the potential economic and wider returns from investment in green infrastructure and environmental improvements: Building natural value for sustainable economic development: the green infrastructure valuation toolkit

London Borough of Bexley Belvedere and the nearby towns of Erith and Thamesmead lie in the London Thames Gateway growth area. They are characterised by a low skill, low wage economy that struggles to sustain a retail and wider amenity offer. The area’s main employment location of Belvedere is blighted by 70ha of vacant or derelict land. In order to attract new businesses a new link road has been planned, with the intention of opening up the area. 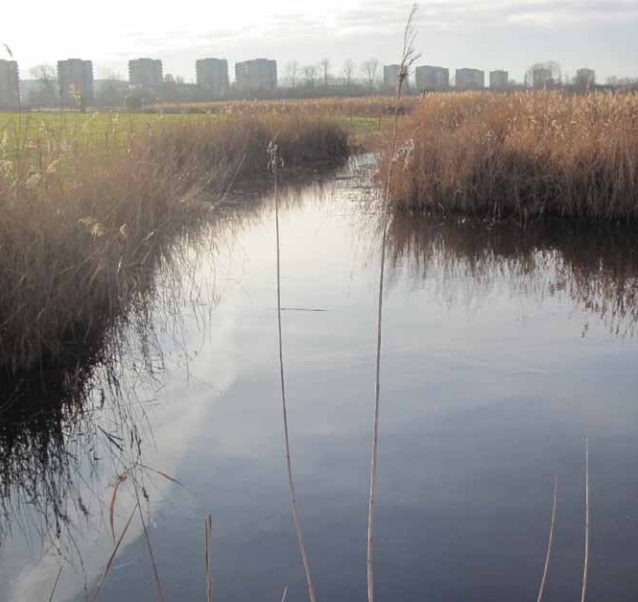 Belevedere Wetlands
The Belvedere Wetland project was created to restore the hydrological system in Belvedere and Erith Marshes to improve flood alleviation and enhance wetland habitats to protect and encourage wildlife such as Water Voles. A management plan was developed to ensure the long term sustainability of the restored works. Over 300m3 of extra flood storage capacity has been created here.

The site enjoys a unique environmental setting. It is immediately adjacent to the Erith Marshes, a site of regional importance for nature conservation. Under investment in the environment of the area needed to be addressed in order improve access, flood prevention, recreation and biodiversity as a way of maximising the functionality of the green infrastructure. The local network of drainage dykes has received little or no maintenance in recent years and its restoration is considered vital in preventing the flooding of low-lying residential areas. Pedestrian and cycleway improvements (green links) are also planned.

The Erith Marshes and Belvedere Links project aims to enhance the environmental quality of the marshland and to improve its accessibility from the surrounding area. In turn, this is expected significantly to increase the attractiveness of the Belvedere employment site to higher value businesses.  The green infrastructure valuation toolkit has been used to evaluate the benefits of this significant investment in the marshes and adjacent area. As recommended in this guide, a three stage process was applied.  Preparation: Understanding physical characteristics and beneficiaries The project would be focused on 156 ha of existing marshland, including 15km of drainage dykes, and the redevelopment of 12.5 ha of derelict land, which would be made possible by the construction of the new link road.

The works will greatly improve access, security and sustainability in Belvedere, with a range of long term benefits for local employers, staff and residents. The main direct beneficiaries of the new access and enhanced greenspace are expected to be local residents. Based on an analysis of the number of households, the number of residents living within 300m and 1200m of the project were estimated to be over 5,000 and around 47,500, respectively. [Actual figures are 5,164 and 47,518, but this sounds too precise!]  The number of recreational users is predicted to be 237,600 (based upon a likely 10 visits each year, 50% of which are assumed additional to the existing baseline figure).

Assessment: Identifying potential benefit areas and applying relevant tools As a natural green-space area, the marshes are considered likely to have a positive impact on climate change adaptation, flood alleviation and general quality of place.  The green corridor element of the project (paths and cycleways) is likely to have tourism, transport [it seems obvious we that we should mention it, although Genecon haven’t costed transport benefits] and public health and well-being benefits.  The different elements of green infrastructure within the project (exact area of canal, wetland, different types of grassland, woodland and length of footpaths and cycleways) have been analysed in the context of the likely beneficiaries.  The relevant tools were applied to assess the value of the benefits identified in monetary terms (for those benefits that could be costed) quantitative terms or qualitative terms. Some valuations were expressed as a precise figure, whereas others were expressed as falling within a range of figures. For valuation purpose, most benefits were deemed to last for 10 years, although some were deemed to last for longer periods. In each case, the valuations were discounted to give a present value (PV) figure, so that benefits which accrued for different lengths of time could be easily and directly compared.

The benefits were calculated as follows: 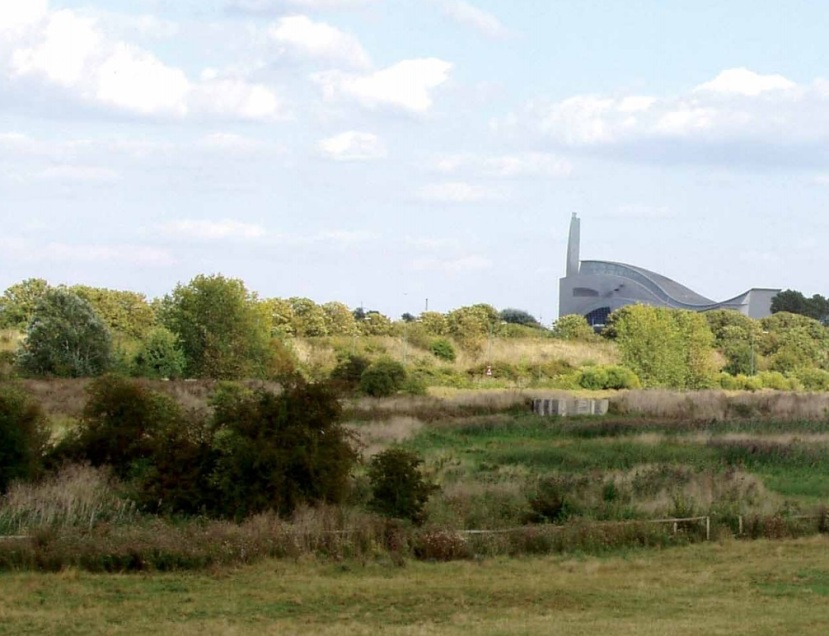 Summary
The total value of the benefits generated by the improvements was estimated to be £53.1 million – £55.8 million (PV). Just over half of this (56%) was accounted for by that aspect of the site’s increased employment potential which was considered attributable to the green infrastructure. The other significant benefits included land and property uplift, improved labour productivity from fewer working days lost, enhanced health and well-being, recreation and flood alleviation.  The capital investment is to be made by regeneration and economic development agencies. The total cost of £10.54 million includes the road construction and just £1.84 million of this relates to the landscape improvements. This case study illustrates the challenge of how best to capture the relative impacts of green and grey infrastructure.  Without the link road, the number of jobs attracted would be low, but with improved access, the importance of improved environment becomes much greater. This project therefore shows a very good rate of return on investment in the natural
environment.